We met with 4 different water treatment companies this week.

In Santa Barbara, most of our water comes from the Santa Ynez Valley watershed, which feeds Cachuma Lake.  There is almost no farming or industrial activity in the water shed, so our water is reasonably pure.  However, it tends to go through a lot of rock which means it picks up quite a lot of minerals, and is relatively hard; we’ve been told it is about 23 grains hard.  It also tastes pretty bad. Additionally, a new reverse osmosis treatment plant just came online which will feed about a third of the city water system.

The main things we are concerned about are

Here is what we are thinking for a treatment system. 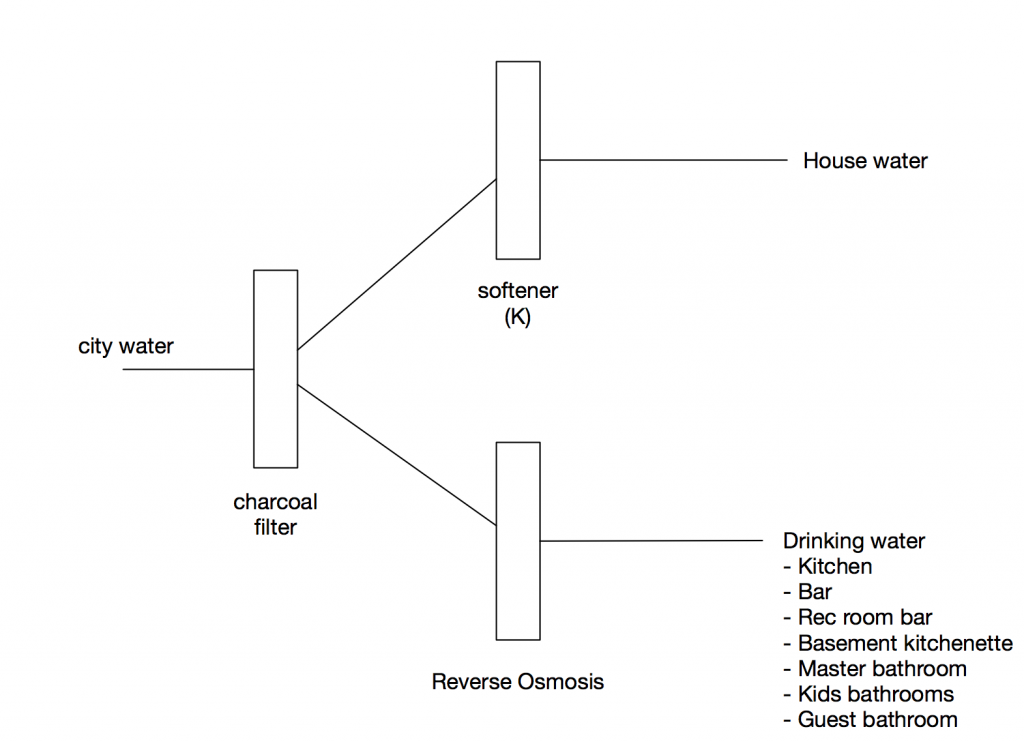 The charcoal filter removes the chlorine and other byproducts

The water softener removes the minerals which is better for the pipes, fixtures, and shower surfaces.  This week I finally understood how water softeners work, and it is interesting.

There are two main implications from this process

Some will tell you that there isn’t much sodium in the water, and it is fine to drink it and water plants, but it all depends on your water hardness.  The harder your water, the more sodium you will use and therefore add to your water.

Despite the higher cost, we are going to use potassium as it is the right thing to do.

The reverse osmosis unit will filter for drinking water, mostly to improve the flavor.  One drawback of reverse osmosis is that, by removing all the minerals from the water (which increase the PH), it makes the water more acidic.  Acidic water will eat away at copper pipes.  There are two ways around this problem.

We are still deciding whether to use plastic pipes or not.  From what we know, plastic pipes (PEX) carry a slightly higher risk of failure.

Re-mineralization is the process of adding a very small amount of minerals back to the water, mostly calcium, which makes the water more alkaline.

Another consideration is the trend of alkaline water.  By removing the hardness from our drinking water, we are making it less alkaline.

We are still deciding on all this.  We may end up plumbing the house to accommodate the system above, but not putting it in initially.